Let’s go through a little bit of physiology again.  We talked about how calcium is important for contraction when we mentioned calcium channel blockers used for relaxing muscles.  Now let’s review in detail about the action potential so then we could talk about how pharmacology comes into play here.

Electrical activity hits, calcium is released to the sarcoplasm, which then interacts with troponin, actin-myosin couples, and we have a contraction.

Let’s look at this graph. If you put a probe on any particular area on the heart, you could see the electrical activity that takes place. 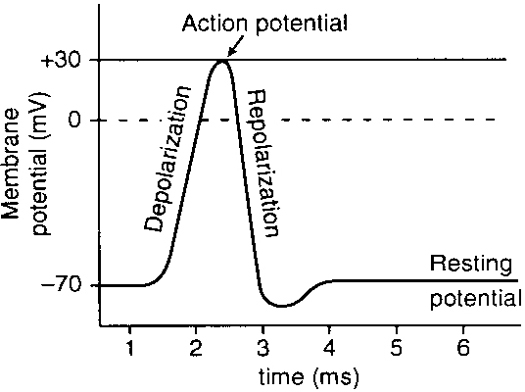 At Phase 0, the fast sodium channel opens up and sodium enters the cell.  This is phase 0, known as depolarization.

At Phase 1, we have a mild repolarization.

At Phase 2, we have a plateau because calcium is entering and it’s called the slow calcium channel.  Contraction will take place here.

At Phase 3, potassium leaves the cell and this is repolarization, taking us back to phase 4, the resting phase.  The cell doesn’t exactly rest in phase 4. because the sodium potassium pump is still working getting it ready for the next AP.

We’re going to graph cardiac output on the Y and on the X is Left Ventricular End Diastolic Pressure (LVEDP).

Cardiac output increases with LVEDP.  If you blow a balloon up and you blow it up a bit too much, it will lose its elasticity.  There will be a ton of pressure in the balloon, but if you let it go it won’t collapse as much as before.  If you look at the x-ray of heart failure, it looks large because it has lost its elasticity.  If you stretch the heart too far with too much pressure, the output decreases and that’s what we see in an individual with heart failure.  Cardiac Output increases with pressure up to a point of congestive heart failure.  Cardiac glycosides shift this curve so the cardiac output becomes greater.

Low output failure (congestive heart failure) is when the demand for blood flow is normal but the heart cannot keep up with the demand and fails.

High output failure means the heart is healthy but the body is asking too much from it.

This is for anybody who wants to get strong and have fun with a gymnastics-inspired routine. It is highly bodyweight-exercise oriented (no external weights) and … END_OF_DOCUMENT_TOKEN_TO_BE_REPLACED

I've created this hip flexibility program for those that would like to improve their flexibility in an efficient manner, with a follow along video that only … END_OF_DOCUMENT_TOKEN_TO_BE_REPLACED

This training routine is focused largely on increasing strength and muscle mass (aka muscular hypertrophy). If I had to sum up the routine in one fell swoop I … END_OF_DOCUMENT_TOKEN_TO_BE_REPLACED

I have three premium flexibility programs that I offer and many of you have been clamoring for a bundle-package, so here it is! You could now buy the … END_OF_DOCUMENT_TOKEN_TO_BE_REPLACED

In this day and age most people are working from home and struggling to find the balance between stagnation and moving to stay fit. This program was developed … END_OF_DOCUMENT_TOKEN_TO_BE_REPLACED

For those who have poor flexibility, tight hamstrings and want a simple program that will help them to get looser in a gentle, non-painful manner. In this … END_OF_DOCUMENT_TOKEN_TO_BE_REPLACED

I don't know about you but nothing gets me fired up more than working on my abs. It's a unique muscle group that is utilized in every exercise and making it … END_OF_DOCUMENT_TOKEN_TO_BE_REPLACED

For anyone who wants better shoulder health, shoulder flexibility, a looser upper back and improved posture, this program takes all the guess work out of it to … END_OF_DOCUMENT_TOKEN_TO_BE_REPLACED