In the summer of 1962, nine miles of the autobahn in Freiberg, Germany were closed for Frenchman Jose Meiffret to set a new cycling speed record.  His bicycle was setup with a 130-tooth chainring (and 15t cog to equal 225 gear inches), equipped with wooden rims so they won’t overheat and weighed a hefty 44lbs (20 kg).  A Mercedes-Benz 300 SL was to be in front of him to act as his windshield.  They needed quite a sporty Mercedes because well, he had intentions of breaking 120mph and in the 1960’s, that was very fast even for a car.

A motorcycle helped him to get going on that gigantic gear.  At 20mph, he struggled to keep his balance and his legs were barely moving.  At around 40mph he was starting to get in some sort of stride.  His job then was to stay glued to the windscreen of the back of the Mercedes.  If he fell back more than a foot behind, the air turbulence would be the end of him.

Eventually, he somehow made it to 127mph, potentially faster than free fall in space.  His legs were spinning at 3.1 revolutions per second and each second carried him 190 feet!  Meiffret had survived his date with death.  There’s a french documentary about it here if you’re interested (sorry no subtitles).

In his pocket, Meiffret carried a note:

In case of fatal accident, I beg of the spectators not to feel sorry for me. I am a poor man, an orphan since the age of eleven, and I have suffered much. Death holds no terror for me. This record attempt is my way of expressing myself. If the doctors can do no more for me, please bury me by the side of the road where I have fallen.

In 1985, John Howard beat Meiffret’s record at a crazy 152mph.  Then in 1995, Fred Rompelberg beat Howards record at a whopping 167mph and that remains the world cycling record. 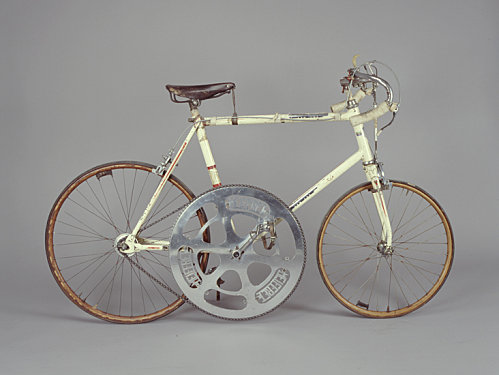 In this day and age most people are working from home and struggling to find the balance between stagnation and moving to stay fit. This program was developed … END_OF_DOCUMENT_TOKEN_TO_BE_REPLACED

I've created this hip flexibility program for those that would like to improve their flexibility in an efficient manner, with a follow along video that only … END_OF_DOCUMENT_TOKEN_TO_BE_REPLACED

For those who have poor flexibility, tight hamstrings and want a simple program that will help them to get looser in a gentle, non-painful manner. In this … END_OF_DOCUMENT_TOKEN_TO_BE_REPLACED

Looking for a simple and straightforward bodyweight-oriented strength training routine that doesn't take too much time? You're not the only one! A survey I … END_OF_DOCUMENT_TOKEN_TO_BE_REPLACED

This is for anybody who wants to get strong and have fun with a gymnastics-inspired routine. It is highly bodyweight-exercise oriented (no external weights) and … END_OF_DOCUMENT_TOKEN_TO_BE_REPLACED

I don't know about you but nothing gets me fired up more than working on my abs. It's a unique muscle group that is utilized in every exercise and making it … END_OF_DOCUMENT_TOKEN_TO_BE_REPLACED

For anyone who wants better shoulder health, shoulder flexibility, a looser upper back and improved posture, this program takes all the guess work out of it to … END_OF_DOCUMENT_TOKEN_TO_BE_REPLACED

I have three premium flexibility programs that I offer and many of you have been clamoring for a bundle-package, so here it is! You could now buy the … END_OF_DOCUMENT_TOKEN_TO_BE_REPLACED