Some neurons in the CNS release neurotransmitters that excite other neurons (meaning to fire off APs) and some inhibit (prevent) the generation of action potentials.

Question and reminder: Where are most of the potassium ions normally found in the body?

Where are most of the sodium ions found?

Outside the cell. There is an excess of negative charges inside and excess of positive outside  and this is known as the resting state). 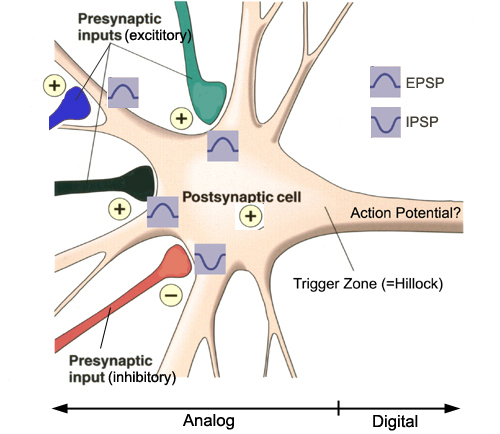 If an action potential goes down the synaptic knob of another neuron and releases an inhibitory neurotransmitter, it’s going to be activating specifically different receptor sites on the cell membrane of the postsynaptic cell.

In other words, inhibitory neurotransmitters cause an opening of ligand-gated potassium ion channels which leads to a local hyperpolarization (more negative than normal).  This is known as a Inhibitory Postsynaptic Potential (IPSP) because it’s going to be LESS likely to throw off an action potential.

Contrast that with exitatory NTs: All excitatory neurotransmitters cause an opening of ligand-gated sodium ion channels.

Whether potassium ions go out the cell or chloride ions go in the cell, the cell becomes hyperpolarized.

So what’s this postsynaptic neuron going to do if both these EPSP and IPSP’s are firing off together? It depends on the sum of all these influences. Whether a neuron generates an Action Potential, or not, this depends on the overall sum of EPSP’s and IPSP’s occurring in the neuron at any moment in time.

Remember how generating an AP is like pushing a boulder over a cliff to get it over the threshold? With EPSP’s and IPSP’s we have people (excitatory NT’s) pushing the boulder uphill, trying to push it over trying to generate a AP and we also have others (the inhibititory NT’s) pushing it the other way.

Let’s pretend it’s an interneuron (since those are involved with memory, learning, and decision making). Imagine someone walks in with fresh pizza and I go “Wow I want pizza!” It’s going to be pushing the action potential of that neuron to the edge. Then you think maybe I shouldn’t cause I just ate and I’m not even hungry! But then I smell the pizza and I really want it again. Now I’m thinking I have only $2 on me so I really shouldn’t buy the pizza. So should I? There’s factors telling me I should and shouldn’t buy the pizza. 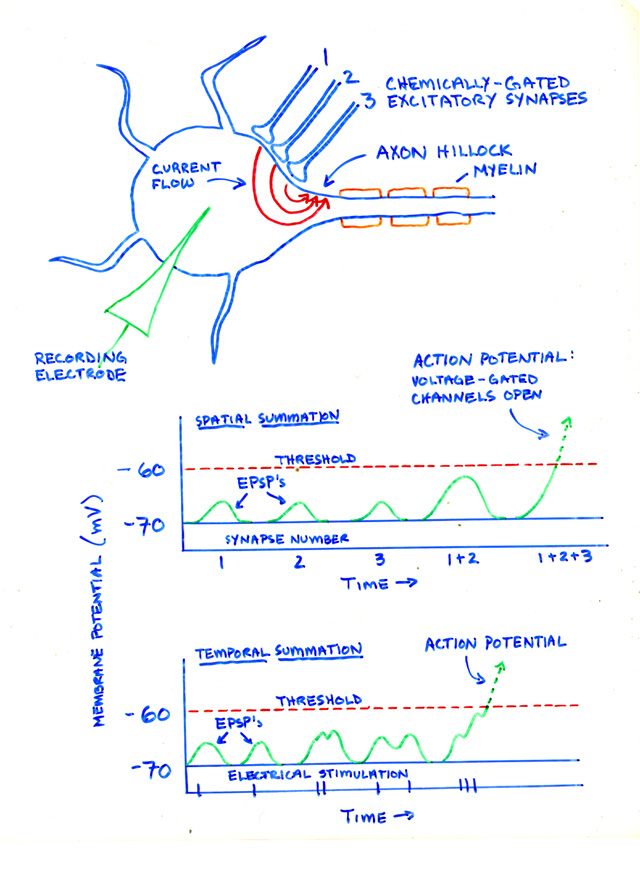 Look at the picture on the right.  The Y-axis of the graphs are Membrane Potential (mV) and it shows that the cell starts out with -70.

At the bottom graph, when one neuron repeatedly fires, affecting a pos synaptic neurons, this is summing in time (temporal summation) that causes an action potential.

What would’ve happened if neuron B released its inhibitory NT repeatedly? It would hyperpolarize more and more, making it more and more negative, making it less and less likely to fire off an AP.

There’s also something called spatial summation which is the summation of EPSP’s or IPSP’s due to stimulation by more than one neuron simultaneously.

Answer: They would cancel out and there wouldn’t be much difference.

Do you have questions in regards to your training, diet or habits in general? I bet you do because I get messages every single day from people looking for … END_OF_DOCUMENT_TOKEN_TO_BE_REPLACED

Looking for a simple and straightforward bodyweight-oriented strength training routine that doesn't take too much time? You're not the only one! A survey I … END_OF_DOCUMENT_TOKEN_TO_BE_REPLACED

In this day and age most people are working from home and struggling to find the balance between stagnation and moving to stay fit. This program was developed … END_OF_DOCUMENT_TOKEN_TO_BE_REPLACED

I have three premium flexibility programs that I offer and many of you have been clamoring for a bundle-package, so here it is! You could now buy the … END_OF_DOCUMENT_TOKEN_TO_BE_REPLACED

For anyone who wants better shoulder health, shoulder flexibility, a looser upper back and improved posture, this program takes all the guess work out of it to … END_OF_DOCUMENT_TOKEN_TO_BE_REPLACED

I don't know about you but nothing gets me fired up more than working on my abs. It's a unique muscle group that is utilized in every exercise and making it … END_OF_DOCUMENT_TOKEN_TO_BE_REPLACED

I've created this hip flexibility program for those that would like to improve their flexibility in an efficient manner, with a follow along video that only … END_OF_DOCUMENT_TOKEN_TO_BE_REPLACED

For those who have poor flexibility, tight hamstrings and want a simple program that will help them to get looser in a gentle, non-painful manner. In this … END_OF_DOCUMENT_TOKEN_TO_BE_REPLACED