Emerging disease training is required because as a health care profession you play a role in disease detection, recognition, and control. This is an invaluable guide to patient care with which you must be familiar.  Your competence and efficacy are dependent on this and so is your job.  If you don’t know what you’re doing, they’ll find out pretty quickly and send you home because you’re in danger of others and yourself.

Culture: You send a specimen to the lab and the labs job is to tell you what the organism is, a definitive ID based on gram stain, morphology and biochemical profile.

Susceptibility: The lab also gives you the info on the antibiotic susceptibilities to know how to treat it.

How are you going to know these things if the lab doesn’t tell you?  Do you look at the patient and say, “You have Staph Aureus”?  No.  You have to take the specimen, take it to the lab, and in the lab they culture it, isolate it and tell you what the identity is based on a gram stain, morphology, biochemical profile (whether it produces oxygen or what) and so forth.

Here’s an actual clinical report with discussion below it.  By the way, hard paper copies are not the way of the future.  Nowadays you look at the reports online and the value of this is that you could collect/download all the data on one site.  Also patients records can be kept electronically. 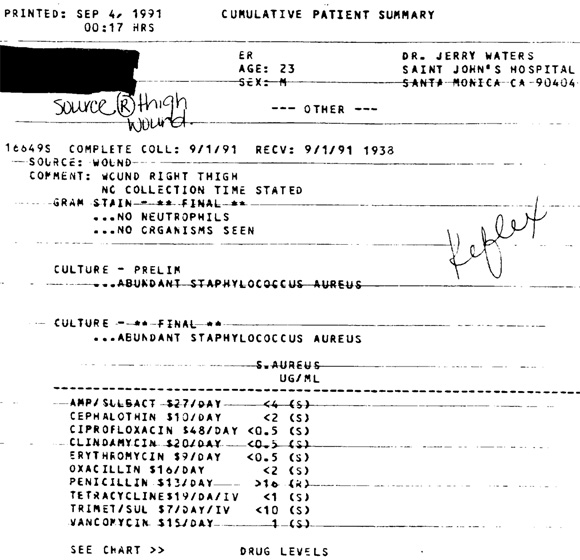 The source of this sample is a wound located on the right thigh.

For the gram stain it says no neutrophils (white blood cells) or organisms were seen.  The gram stain is often the basis of the report.

In the middle, the preliminary and final cultures say “abundant staphylococcus aureus.” Remember, the culture (“C”) is what gives you the definitive identification (genus and species).

Below the dashed lines are the final report where we have values listed under UG/ML.  This is the concentration of an antibiotic that inhibits the particular organism known as the Minimum Inhibitory Concentration (MIC).  This tells you the level of antibiotic that is associated with effective treatment of the infection and the lowest concentration you need to treat that organism.  A lower MIC is an indication of a better antimicrobial agent.   In actuality you will need a higher concentration than the MIC. 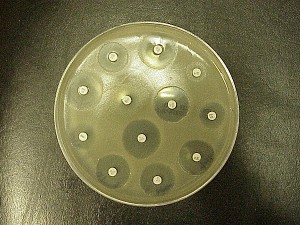 We also have sensitivity profiles known as the Kirby Bauer Disc Diffusion:  It’s a qualitative assessment based on zone size.  You take a plate, make a lot of bacteria from a swab and then you put different antibiotic disks on it, incubate and you get zones of inhibition.  The zones of inhibition are encircling where the bacteria have NOT grown because they are being inhibited.  Then you measure the zones and you refer to a chart known as the NCLS (National Committee and Laboratory Standards) that allows you to determine the prevalence of zone sizes.  The bigger the zone, the more likely it’s to be susceptible to the antibiotic.

These MIC’s or zone diameter values correlated with MICs are breakpoints.  In general, larger zones correlate with smaller minimum inhibitory concentration (MIC) of antibiotic for that bacteria.  They are a tremendously important guide toward choosing the appropriate antibiotic.

You can end up with three possibilities:

2. You end up with I which means intermediate.  That intermediate susceptibility is only effective if there’s evidence that the antibiotic accumulates in blood and body fluids as only some things can penetrate the blood-brain barrier.  The intermediate is a second choice, not your best choice.  If your patient is allergic to the first choices or the intermediate has a better therapeutic ratio, then it may be used.

3. The last one is R for resistant and is not useful.  You would not treat a bacteria with an antibiotic which does not work.  Penicillin in this case would not work because of its number.  The higher the MIC equates to greater resistance.

From the data given, what are some things that influence choice and antibiotics?  You may be able to answer those questions with this report but remember, you have to consider the toxic effect on the patient too.

I don't know about you but nothing gets me fired up more than working on my abs. It's a unique muscle group that is utilized in every exercise and making it … END_OF_DOCUMENT_TOKEN_TO_BE_REPLACED

In this day and age most people are working from home and struggling to find the balance between stagnation and moving to stay fit. This program was developed … END_OF_DOCUMENT_TOKEN_TO_BE_REPLACED

This is for anybody who wants to get strong and have fun with a gymnastics-inspired routine. It is highly bodyweight-exercise oriented (no external weights) and … END_OF_DOCUMENT_TOKEN_TO_BE_REPLACED

For those who have poor flexibility, tight hamstrings and want a simple program that will help them to get looser in a gentle, non-painful manner. In this … END_OF_DOCUMENT_TOKEN_TO_BE_REPLACED

For anyone who wants better shoulder health, shoulder flexibility, a looser upper back and improved posture, this program takes all the guess work out of it to … END_OF_DOCUMENT_TOKEN_TO_BE_REPLACED

This training routine is focused largely on increasing strength and muscle mass (aka muscular hypertrophy). If I had to sum up the routine in one fell swoop I … END_OF_DOCUMENT_TOKEN_TO_BE_REPLACED

I've created this hip flexibility program for those that would like to improve their flexibility in an efficient manner, with a follow along video that only … END_OF_DOCUMENT_TOKEN_TO_BE_REPLACED

I have three premium flexibility programs that I offer and many of you have been clamoring for a bundle-package, so here it is! You could now buy the … END_OF_DOCUMENT_TOKEN_TO_BE_REPLACED