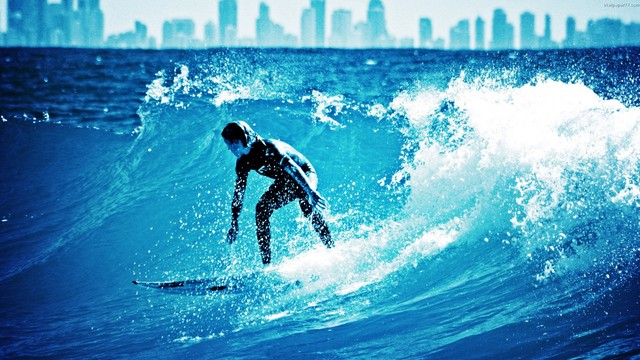 Summer has arrived and with temperatures expected to hit triple digits for the inland areas, millions of people are going to escape to the beaches to cool off and enjoy themselves by the coast.

Each week, over 500 beaches on the west coast are graded A to F based on bacteria analysis.  I tend to go swimming in the ocean several times a month during summer but before I go, I always check the water quality grades.

Generally speaking, the water is clean when it hasn’t rained for a long time.  Whenever it rains, the rivers, creeks and storm drains flow into the ocean causing an influx of bacteria and pollution.  Luckily for us, rain is more so on the rare side in the Southern California during the hottest months but it’s still very important to check the grades.

Heal The Bay: Beach Report Card: Provides a nice map of all the water quality grades on the west coast including California, Oregon and Washington.  They get their information from other agencies such as the ones below and provide the most comprehensive analysis all in one spot.

Note: LA county purposely collects its samples directly in front of storm drains, sewage treatment plants and creeks where most of the pollution comes from.  That is why some locations may show bad grades while nearby ones may show A+.  For the record: Avalon bay of Catalina Island has never showed higher than an F for the two years I’ve viewed this list.  I will never touch the water there.

Orange County Beach Info: OC’s monitoring agencies are woefully inadequate relative to LA.  They deceptively claim to have some of the best beach water but that is only because they have cut out dozens of beaches from being regularly sampled over the years due to budget cuts.  Also more importantly, their grades are artificially boosted because they purposely take their samples some 25-80 yards away from polluted run off sources unlike Los Angeles that does it directly.  Unfortunately their website doesn’t even provide grades or report cards, but rather only advisories and closures, if there are any.

Well anyway, I hope that helps and if you would like to read more, I would recommend you check out Heal The Bay’s 2010-2011 Annual Report Card (PDF) that provides a comprehensive analysis on the beach water quality for the west coast with emphasis on Southern California.

For those who have poor flexibility, tight hamstrings and want a simple program that will help them to get looser in a gentle, non-painful manner. In this … END_OF_DOCUMENT_TOKEN_TO_BE_REPLACED

I've created this hip flexibility program for those that would like to improve their flexibility in an efficient manner, with a follow along video that only … END_OF_DOCUMENT_TOKEN_TO_BE_REPLACED

I don't know about you but nothing gets me fired up more than working on my abs. It's a unique muscle group that is utilized in every exercise and making it … END_OF_DOCUMENT_TOKEN_TO_BE_REPLACED

Looking for a simple and straightforward bodyweight-oriented strength training routine that doesn't take too much time? You're not the only one! A survey I … END_OF_DOCUMENT_TOKEN_TO_BE_REPLACED

This training routine is focused largely on increasing strength and muscle mass (aka muscular hypertrophy). If I had to sum up the routine in one fell swoop I … END_OF_DOCUMENT_TOKEN_TO_BE_REPLACED

I have three premium flexibility programs that I offer and many of you have been clamoring for a bundle-package, so here it is! You could now buy the … END_OF_DOCUMENT_TOKEN_TO_BE_REPLACED

In this day and age most people are working from home and struggling to find the balance between stagnation and moving to stay fit. This program was developed … END_OF_DOCUMENT_TOKEN_TO_BE_REPLACED

This is for anybody who wants to get strong and have fun with a gymnastics-inspired routine. It is highly bodyweight-exercise oriented (no external weights) and … END_OF_DOCUMENT_TOKEN_TO_BE_REPLACED