“We only have what we give.”
~ Isabel Allende ~

During CicLAvia last weekend, I was riding my bicycle, loosely following the ++music trailer my brother was towing. 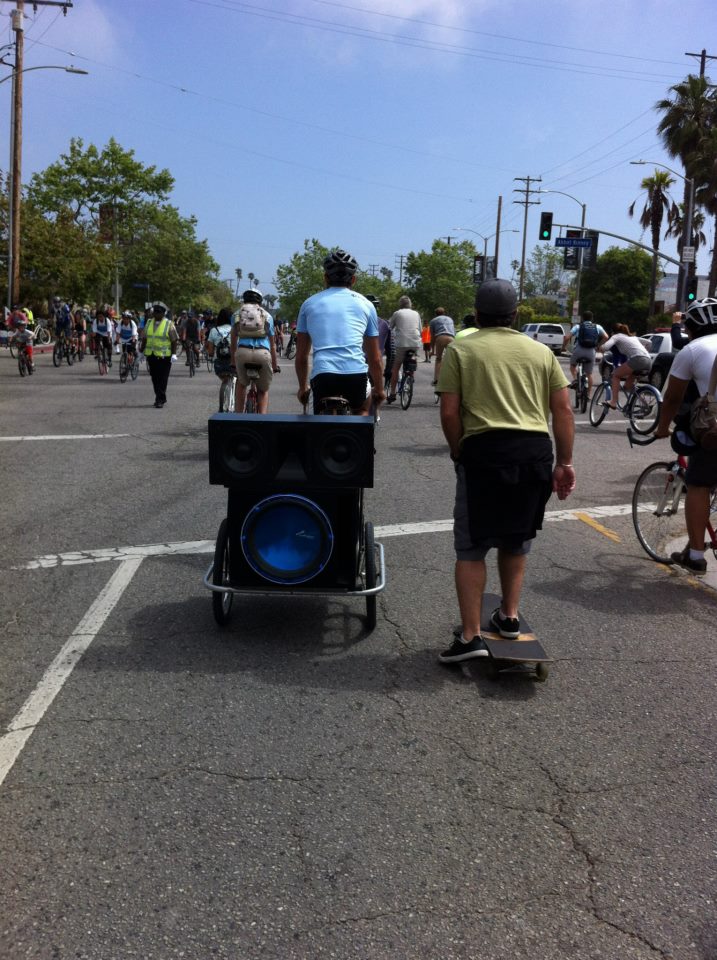 All of a sudden, the asphalt felt really rough.  Like super rough.  It didn’t look rough though and I was wondering why the vibrations were so violent.  I looked down at my tire and wow! I had a flat!  I can’t remember the last time I had a flat. 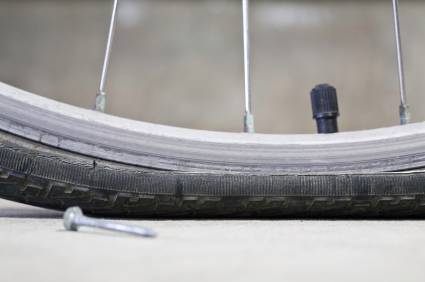 It’s been so long I had forgotten what it felt like to ride on a flat.  Naturally, I had a couple should’ve/would’ve/could’ve-type thoughts come up.  I have been riding on a very worn out front tire and refraining from putting on a newer one.  But alas, I like running my tires until they are absolutely, positively used up.  I try to be environmentally conscious like that and not just throw things away half-used for the sake of rushing to use something new. 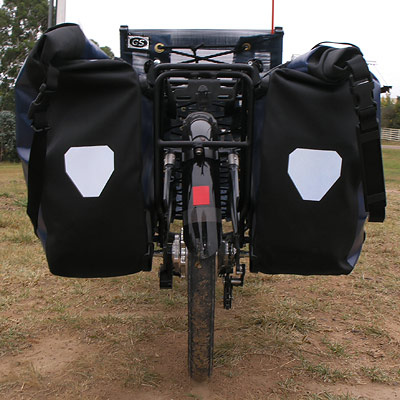 But anyway, despite having a rear rack with my amazing Ortlieb Panniers loaded with stuff (40 liters of space!), I didn’t have any tools on me whatsoever.  I thought worst case scenario, I could hail down my brother and use his tools, but alas, he was far ahead.  I could call him, I thought… but no, the music playing out of the trailer was coming from my iPhone.  So I have no phone.

Oh well, there’s hundreds of cyclists passing by me every minute, so all I gotta do is hail down someone to help fix my tire, right? RIGHT! 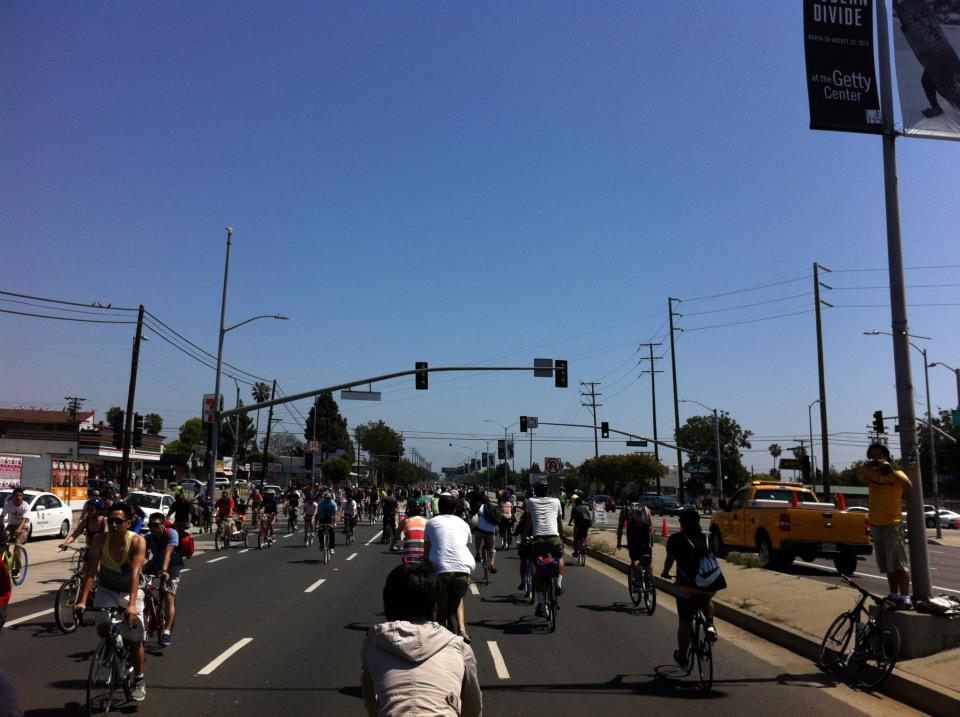 So I’m on the sidewalk, looking at all the cyclists passing by.  In my head I run through the list of items I need.

That’s a lot of stuff!  So anyway.  Instead of randomly yelling out to everybody passing by.  I created a criteria in my head of who might have the tools to help me.

If someone matched the description, then I’d yell out, “Anybody have tools to fix a flat?!”

The first person that pulled over said he had tools.  I was like, great!  He gave me some patches and a tire lever and I went to my bike.  Then I realized, I don’t have a quick-release lever on this bike.  I also need a 15mm crescent wrench.  I asked him if he had it and he said nope!  I kept one of the patches and thanked him for his help and he went along.

Back I go, yelling at people for help, this time asking if anyone has a wrench, cause I had a patch already.

The next guy that stopped by had a tube, tire lever and a wrench!  Great success!  I took the wheel off with the wrench and the tire off the wheel with the lever.  Then I realized the tube he gave me was not going to fit.  I gave him his tools back, thanked him and he rode away.

So I had gotten the wheel off the bike, the tire off the wheel, I have a patch and a tube that’s too large.  Now I just need an air pump to figure out where the hole is in the tube to patch it up.

Back I go, yelling at people for help, this time asking if anyone has a pump.

I put a fresh tube on and got my bike back together, pumped it up and was so glad that was done.  Fixing the tire itself took a few minutes but it took over an hour to be able to be able to actually do it.  That was a great experience.  All these people came together and helped me fit the pieces of a puzzles together.

By now, I knew my brother and friends had to be like 10 miles ahead so I started mashing my brains out to catch up to them.  After a while, I caught up to them.  And they were like, heyyyyy! wondering where I had been, probably.

In conclusion, LA has its shitheads, just like any other big city but then again, it has its fair share of very nice people.  I couldn’t have fixed my flat if it wasn’t for all these people coming together.  Thank you for those who tried to help me.  You seriously helped make my CicLAvia that much more awesome.

What’s the moral of this story?  To always have tools? Well, this 16-in-1 bicycle repair kit looks absolutely amazing.  It would leave me prepared for just about any situation and it’s less than $20.

I didn’t learn that lesson yet though because I rode my bicycle out to the city again today without tools).

I think the moral of the story is.  It’s nice to help people and be helped.

“When we give cheerfully and accept gratefully, everyone is blessed.”

This training routine is focused largely on increasing strength and muscle mass (aka muscular hypertrophy). If I had to sum up the routine in one fell swoop I … END_OF_DOCUMENT_TOKEN_TO_BE_REPLACED

I don't know about you but nothing gets me fired up more than working on my abs. It's a unique muscle group that is utilized in every exercise and making it … END_OF_DOCUMENT_TOKEN_TO_BE_REPLACED

I have three premium flexibility programs that I offer and many of you have been clamoring for a bundle-package, so here it is! You could now buy the … END_OF_DOCUMENT_TOKEN_TO_BE_REPLACED

I've created this hip flexibility program for those that would like to improve their flexibility in an efficient manner, with a follow along video that only … END_OF_DOCUMENT_TOKEN_TO_BE_REPLACED

In this day and age most people are working from home and struggling to find the balance between stagnation and moving to stay fit. This program was developed … END_OF_DOCUMENT_TOKEN_TO_BE_REPLACED

For anyone who wants better shoulder health, shoulder flexibility, a looser upper back and improved posture, this program takes all the guess work out of it to … END_OF_DOCUMENT_TOKEN_TO_BE_REPLACED

Looking for a simple and straightforward bodyweight-oriented strength training routine that doesn't take too much time? You're not the only one! A survey I … END_OF_DOCUMENT_TOKEN_TO_BE_REPLACED

This is for anybody who wants to get strong and have fun with a gymnastics-inspired routine. It is highly bodyweight-exercise oriented (no external weights) and … END_OF_DOCUMENT_TOKEN_TO_BE_REPLACED