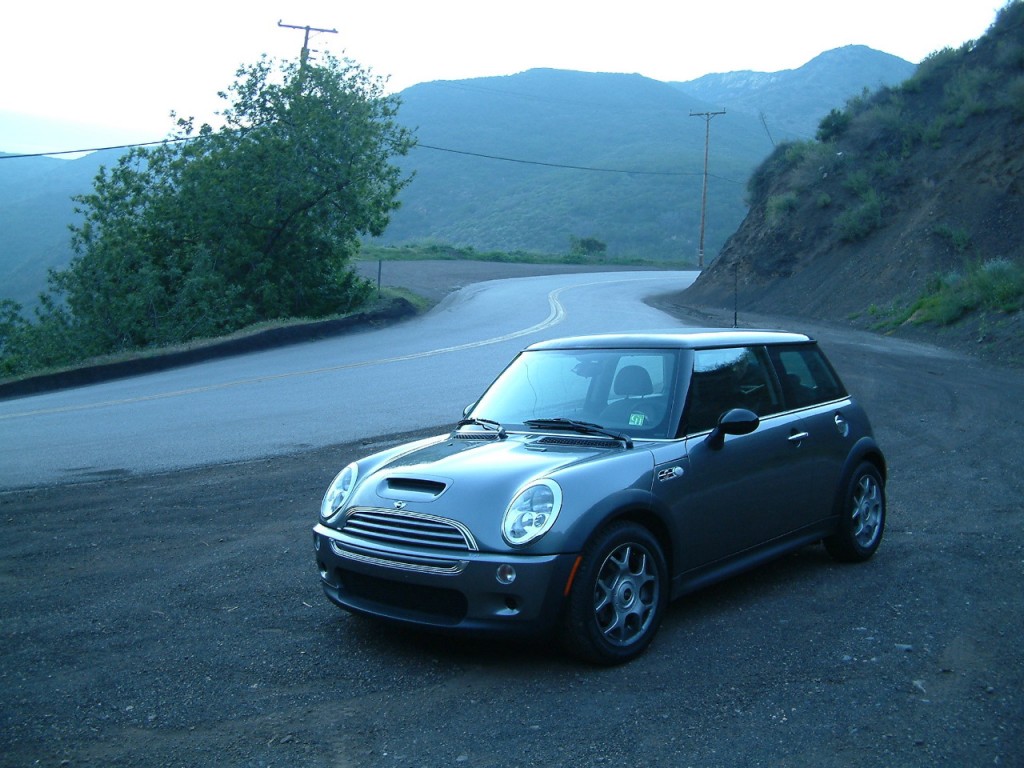 When it comes to cars, I like lightweight cars.  I like small cars.  I like cars that are engineered to handle really well. For these reasons alone, I love old cars, as they used to weigh a lot less.  And I love old European cars to be specific, as they both handle well and are light weight.

When the MINI Cooper came out in 2003, it impressed me because there was finally a car on the market that looked really euro, handled well and was quite practical!

Let’s be realistic about its supposed-subcompact-class though. It has usable rear seats to accommodate 2 people in the back.  The rear leg room makes a mockery of the interior design of most other sports cars such as the Ford Mustang. The rear seats fold down completely flat allowing better versatility than most trunks! (Hatchbacks > Trunks)

I don’t a wife or kids. I’m almost always driving alone and occasionally, I’ll have one passenger.  Very rarely do I have more than one passenger in the car. Ironically, I could even say that this subcompact car… is actually too large for me!

So… in 2003, I visited a MINI dealership to see their inventory.  Almost all of them were loaded with excessive packages that were dramatically inflating the price AND making the cars heavier than I’d prefer. I found I could custom order my car to come the way I want.   I wanted minimal options to keep the price low and the weight of the car low.  For you see, weight is everything in racing, handling, efficiency/mileage.  The drawback was I had to wait 3 months for it to arrive but it was totally worth the wait!

So I chose the Mini Cooper S in dark silver and a black roof while purposely avoiding the following options:

The Cooper S up until 2006 came with only one choice for a transmission: a 6-speed manual. That was an unheard of (and an awesome) move by MINI USA.

Wheels are a significant factor in affecting efficiency, handling and comfort because a wheel qualifies as both unsprung and rotational weight.

Here are the logical reasons why I prefer to have the the smallest, lightest wheels on my car:

Unfortunately car makers for over the past decade have been increasing the standard wheel size that cars come with solely for aesthetics. Ironically, they oftentimes label the option for larger wheels as a “sports” package. These “upgrades” are actually DOWNGRADES when it comes to handling and gas mileage. They do nothing but give you cosmetically larger looking wheels (for about $1000 too!).

This trend may have been catapulted due to all the inane mainstream hip-hop songs bragging about the size of their “dubs.” First they were 18’s… then it became 20’s… then 20″ spinners, then 21’s… then it became 24’s due to SUV’s and so forth… really childish stuff. I’m sure it has something to do with this American mentality that bigger is better.

I didn’t order leather seats, power seats, heated seats, none of these unnecessary things that only add both to the cost AND weight!

The only options I ordered were DSC for safety and the Harmon Kardon sound system because listening to music with a nice sound system is AWESOME.

Three months later, after a boat ride from Britain to the east coast, and a truck shipping my car to the west coast, I got the car…  That was a great time… 🙂

Early on, I weighed my car with a quarter tank of gas.  The scale showed 2,540lbs. That was pretty light relative to most cars on the street in the USA!  However, it’s not really something to brag about since 2,540lbs is still quite heavy for a car maker whose name is MINI.

Since buying my car, I have lightened it further over the years.

I didn’t weigh my car since doing these changes, but I can safely say that I saved over 60 additional pounds bringing the weight down to 2,480lbs.

Weight and performance trends in the US car market…

Cars have only gotten consistently heavier over the decades.  For some reason a lot people think older cars used to be heavier and oftentimes selectively remember large Cadillac’s and Lincolns that are colloquially referred to as “tanks” due to their size and weight. But let me remind you that compact cars existed back then too and up to the very early 1990’s, they could be as low as 1800lbs and as heavy as 2300lbs.  In comparison, my MINI cooper, a subcompact, with the lowest weight configuration possible from the factory, weighed 2,540lbs.

One reason why cars of today are relatively heavier are due to increased safety standards that demand frames be more rigid and have front and rear beams underneath the body.

A more glaring issue is that car makers are ever increasing the size of their models.  Have you noticed that cars are getting slightly longer, wider and taller with every updated generation?  After so many generations, popular models that started out as subcompacts and compacts from the 70’s and 80’s are now compact and mid-size, respectively.  Anytime a car is made larger, it’s going to simply require more material and be a bit heavier.

Also, the hundreds of manufacturers that create the individual parts that make up a car are not being upheld to higher standards to create lighter versions of their parts.  As a result, cars have gotten not only larger but more bloated over the decades, just like our software! And people!

The general public seems to have a perception that larger cars, namely SUV’s, are safer simply because they are larger.  Honda, which makes some of the safest AND most fuel-efficient vehicles, has consistently shown us that dimensions and design are far more important than weight to have a safer car.  This trend of buying larger cars just to feel safe created a domino effect of large cars dominating the scene just to feel safe.  Would you fear driving a small car, if all the other cars on the road were also very small?  Probably not.

The good news is that our engines have gotten dramatically more efficient over the decades, constantly increasing the amount of power they can get out of the same engines.  However, the advancements in engine efficiency are often nullified by the ever increasing standard for power and the extra weight of bloated cars.

Car makers are constantly raising the bar for performance and the standards for acceleration and power are higher than ever before.  In the 1990’s, only very high performance cars had engines exceeding 300hp for example, but nowadays the very popular, Ford Mustang 3.6L V6 creates over 300hp and the 5.0L V8 version generates over 400hp!

Imagine how much better a mileage a Mustang would have if they also offered a small, 2.0L 4-cylinder version that generates just 200hp, which is STILL way more than necessary for everyday driving.  It’s not like most people actually USE (let alone NEED) all that power.  But then again, the Mustang is supposedly their “muscle” car that’s meant to appeal to inexperienced teenagers who often like to speed, getting in trouble with the law or having accidents.

Anyway, my point is that instead of smaller, lighter cars with smaller-displacement engines, car makers seem to be doing the exact opposite.  I know that they are very well aware that weight is everything in regards to efficiency, but they need to make much bolder moves, offering options for even smaller-displacement engines and to stop making cars bigger.  Imagine how efficient our cars would be if they were very light weight like older cars but mate with our newer engines.  What that would do to our mileage and performance?

I suppose if a gallon of gas is $10 one day, maybe we will catch up to the European efficiency standards.  But then they’ll be 20 years ahead of us by then.  😯

For those who have poor flexibility, tight hamstrings and want a simple program that will help them to get looser in a gentle, non-painful manner. In this … END_OF_DOCUMENT_TOKEN_TO_BE_REPLACED

In this day and age most people are working from home and struggling to find the balance between stagnation and moving to stay fit. This program was developed … END_OF_DOCUMENT_TOKEN_TO_BE_REPLACED

I've created this hip flexibility program for those that would like to improve their flexibility in an efficient manner, with a follow along video that only … END_OF_DOCUMENT_TOKEN_TO_BE_REPLACED

For anyone who wants better shoulder health, shoulder flexibility, a looser upper back and improved posture, this program takes all the guess work out of it to … END_OF_DOCUMENT_TOKEN_TO_BE_REPLACED

Looking for a simple and straightforward bodyweight-oriented strength training routine that doesn't take too much time? You're not the only one! A survey I … END_OF_DOCUMENT_TOKEN_TO_BE_REPLACED

This training routine is focused largely on increasing strength and muscle mass (aka muscular hypertrophy). If I had to sum up the routine in one fell swoop I … END_OF_DOCUMENT_TOKEN_TO_BE_REPLACED

I don't know about you but nothing gets me fired up more than working on my abs. It's a unique muscle group that is utilized in every exercise and making it … END_OF_DOCUMENT_TOKEN_TO_BE_REPLACED

I have three premium flexibility programs that I offer and many of you have been clamoring for a bundle-package, so here it is! You could now buy the … END_OF_DOCUMENT_TOKEN_TO_BE_REPLACED